Want to Know More About the Water Cycle? Keep Reading! 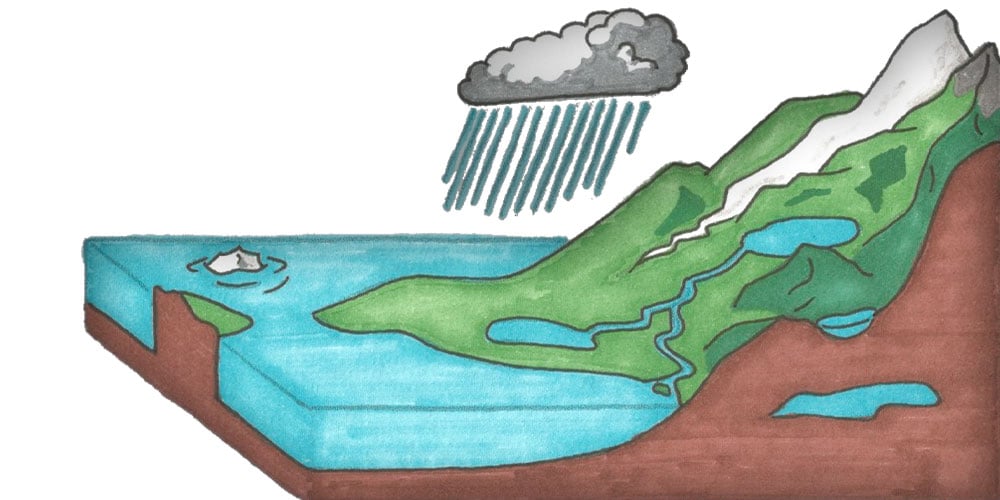 If you’ve ever been curious about how and why we get snow and rain; how rivers and lakes are created; how mountains get their ice caps – the answer is: the water cycle. It’s responsible for some of the Earth’s most fascinating wonders, and it can be explained in a mere seven stages. Keep reading to discover each step. 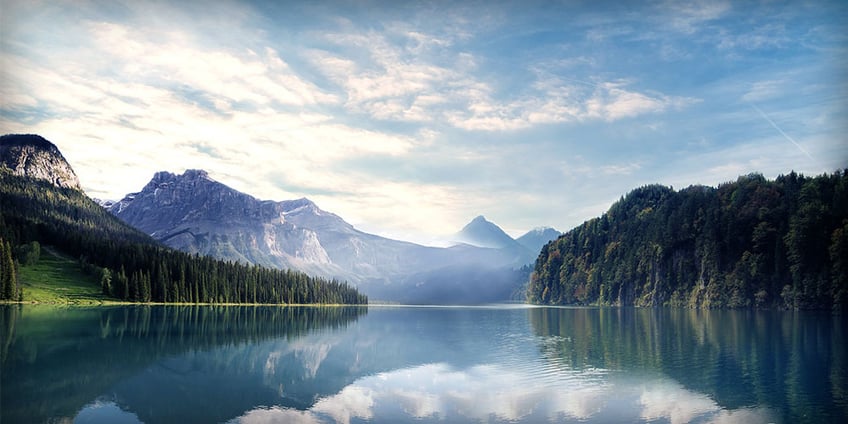 What is the water cycle?

As you drink some refreshing H2O from your glass, you may wonder “what is the cycle of water?” It’s a good question with a fascinating answer, so we’ve broken down some important information about the water cycle into easy-to-remember bitesize points. 🧠

Now that you know some important things about the water cycle, let’s talk about its stages. 🔁 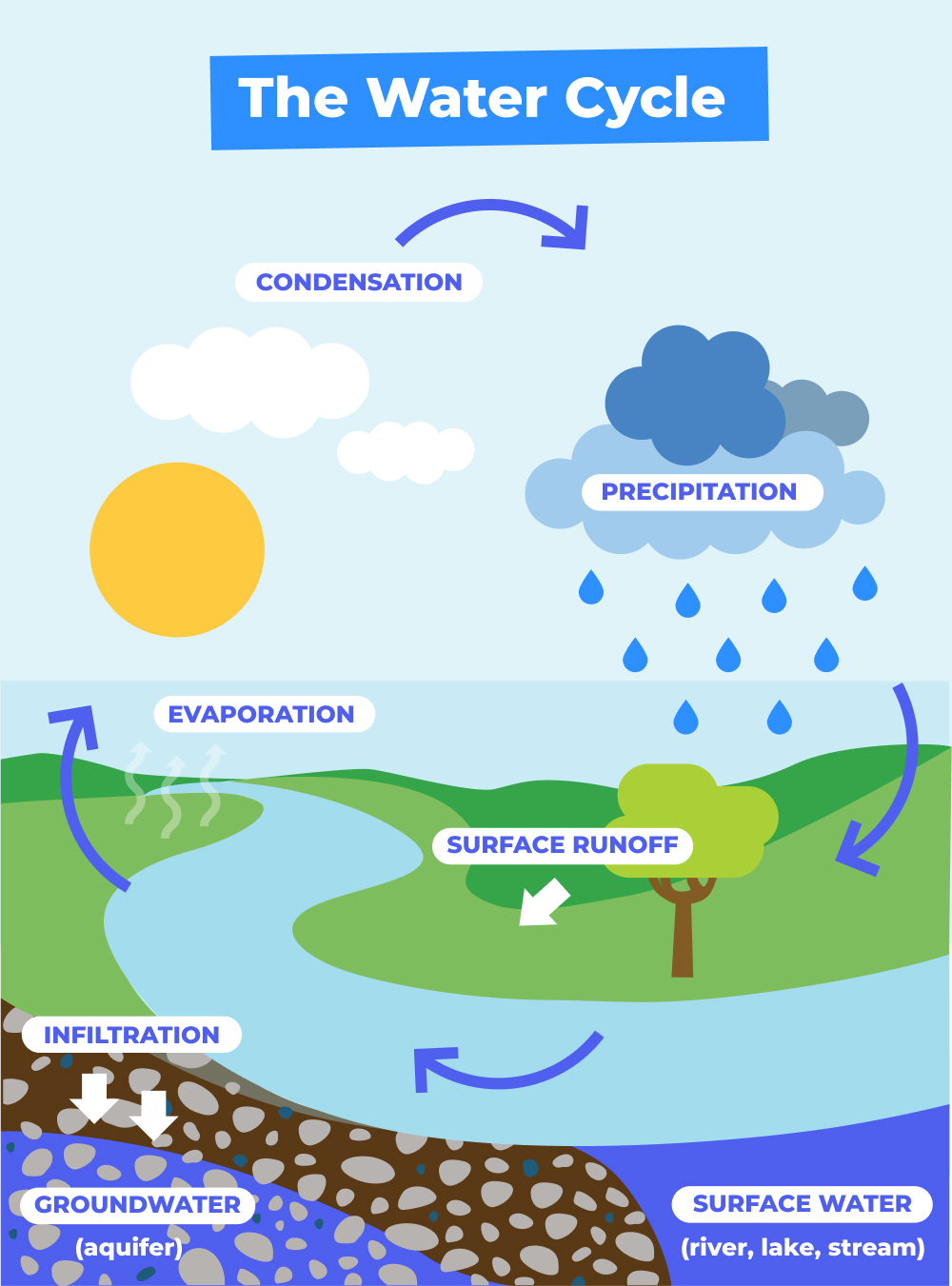 What are the 7 stages of the water cycle?

If you want to follow the stages of the water cycle as we explain them, view or download the water cycle diagram we’ve created just for you. A couple of the following steps aren’t on the diagram but they’re just as important to know. 😉

Evaporation
Everything must start somewhere, and the water cycle starts off with evaporation. Surface water from the Earth’s oceans, seas, rivers and lakes absorbs energy from the sun and turns into water vapor. The sun plays a huge part in the water cycle, in fact, it’s what makes the whole process work. ☀️

As water evaporates, it moves from the hydrosphere (all the water on the Earth’s surface) to the atmosphere (the layers of gases surrounding Earth).

Condensation
As the water vapor rises into the atmosphere, it forms very tiny ice/water particles because of the drop in temperature due to the high altitude – this is called condensation. These particles join to form clouds in the sky. ☁️ ☁️

Sublimation
Not only do we get water vapor from the evaporation of water bodies, but also from ice. Sublimation is the – much slower – process of ice converting directly into water vapor without transforming into liquid first. As you can imagine, this happens where there are large bodies of ice, such as the North Pole, the South Pole and the ice caps on mountains. ❄️

Precipitation
Once clouds are filled with condensed water vapor, the water droplets become larger, and the clouds cannot hold any more water – this is how we get rain. Other forms of precipitation are snow, sleet, hail and drizzle. Water now enters the lithosphere, the solid outer layer of the Earth. 🌍

Similar to evaporation, transpiration is the process of liquid water turning into water vapor via plants. Water is absorbed by plant roots and then pushed into leaves where it transpires through tiny openings in the leaves called stomata.

After the rain has poured, the snow has fallen or the hail has landed, the process of surface runoff follows. Runoff is when excess water (or meltwater, in the case of snow and hail) runs over the Earth’s surface, having flooded the soil below, and forms lakes, rivers and eventually seas and oceans. Therefore, surface runoff is important for keeping bodies of water full.

Of course, not all water that precipitates onto Earth runs off into rivers – some of it moves deep into the soil and this is called infiltration. One of the results of infiltration is groundwater – the source of drinking water for as much as 50% of the global population and 99% of Earth’s liquid freshwater. Groundwater is held by aquifers, bodies of porous rock and sediment (see diagram), deep below the Earth’s surface.

And there you go! We hope you found the diagram helpful – why not print it off and make notes so that you can remember and revise the water cycle stages? 📝

If you need another effective way of learning this amazing scientific process, you could search for songs about the water cycle on YouTube! There’s even a catchy little ditty called The Water Cycle Song which can help you retain this important information in a simple and fun way – just make sure you don’t start singing it in the middle of an exam. 😂

Love science? Take your learning to the next level with our excellent tutors! They can guide you through the water cycle and so much more – book a free trial class today! 😁

How To Become an Astronaut (All the Requirements) 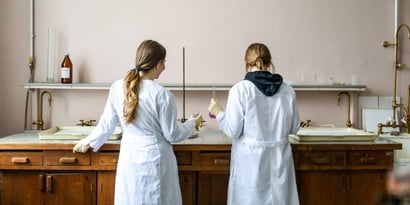 What Are the Most Exciting Ways to Teach Chemistry to Kids?